Is your lawn being overrun by a lawn fungus or disease? Due to the warm, moist weather that we have here in Macon, our turf grass is especially susceptible to disease, fungus, and insect damage. So, what can you do to battle these lawn-destroying problems?

Fungicides may be used to control turf diseases, however, they can be costly and multiple applications are typically required. Often a better approach is to address the underlying issues causing the disease, such as; shade, poor drainage, poor oxygen circulation, dull mower blades, or improper irrigation practices.

Fungicides are also more effective when used preventatively when the conditions for the occurrence of the disease is likely. Treating disease preventatively is also more cost-effective, as lower rates may be used with better results as opposed to treating diseases curatively. It is important to understand that when a disease has caused damage to a lawn, fungicide alone will not regrow your grass. They will only reduce or eliminate the pathogen.

If you notice you have any of these issues in your yard, or you're just not sure what it is you're looking for, please give us a call at 478-318-7644 and we'll be happy to schedule a visit from one of our lawn care specialists.

Dollar Spot is caused by the pathogen Sclerotinia Homoeocarpa and it affects all warm-season turfgrasses. It causes brown or straw-colored patches approximately the size of a half-dollar. Lesions may be seen on the leaf blades. In the early morning dew mycelia may be found, it is a tell-tale sign of dollar spot, and it resembles small spider webs on the turf surface.

The disease typically occurs when temperatures are between 60°F to 85°F and high levels of humidity are present. Fungicides are not usually necessary as the disease dissipates with nitrogen fertilizer applications. 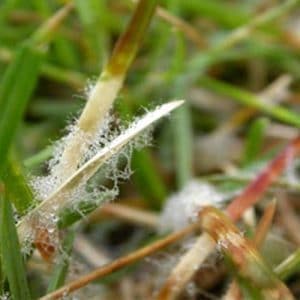 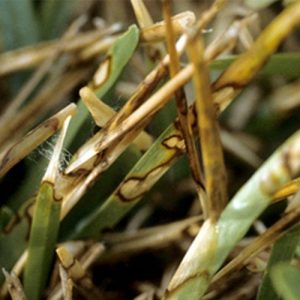 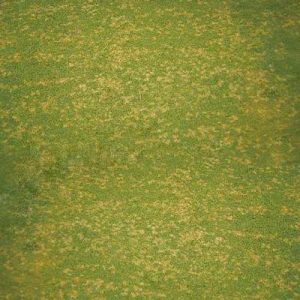 Fairy rings are caused by many different species of basidiomycetes. All warm-season turfgrasses are susceptible to fairy ring. Typically the symptoms of fairy ring appear as large rings of mushrooms or rings with dark green or brown margins.

Fairy rings may be controlled with fungicides applications, however, they are usually chronic problems and continued use is required for adequate disease control. 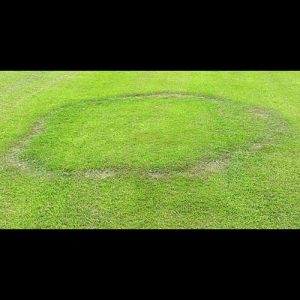 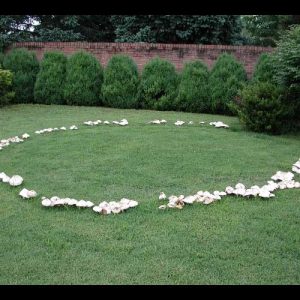 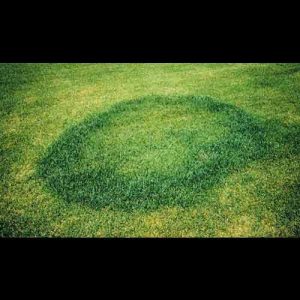 Take-all root rot is caused by the pathogen Gaeumannomyces Graminis. It affects most warm-season turfgrasses. Turf infected with take-all will have wilted patches. The plant wilts because the root system is no longer able to translocate water. The roots will appear in the color range of brown to black and look decayed. The disease favors wet soils with a pH of 6.5 or higher.

Acidifying fertilizers and fungicide applications may be used to control the disease. 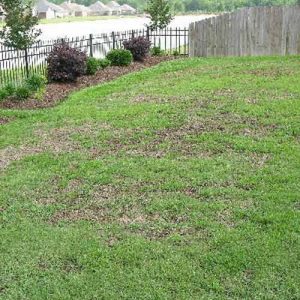 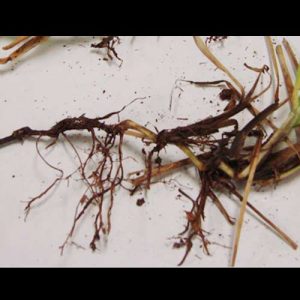 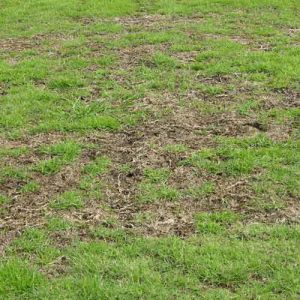 Symptoms of Large Patch lawn disease appear as large irregular shaped patches. The outer margin will usually have an orange or reddish color when the disease is active. These patches usually start small, 3-5 ft, and can grow and join other patches to the extent that the entire lawn is affected. This lawn disease is particularly damaging to Centipede and St. Augustine lawns, which means this disease has become a major problem in the Macon, GA region.

Because the disease is promoted by high levels of nitrogen applied at incorrect times, we never apply nitrogen before May or after August. Fungicide applications may be used to control the disease and should be targeted at times of high disease pressure. 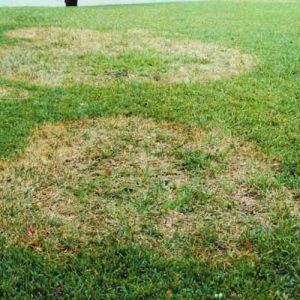 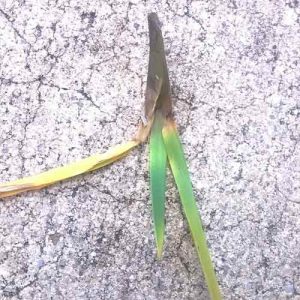 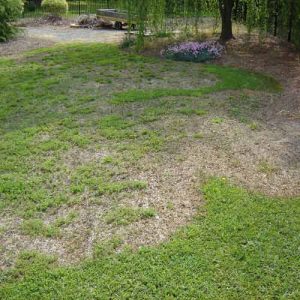 Rust is caused by the pathogens Puccinia. This lawn disease is typically seen in Zoysia and Bermuda grass. Zoysia is particularly susceptible to the disease. Rust appears as orange specks on the leaf blade. If left untreated the leaf blade will decay from the tip down and large areas of turf may thin.

Rust usually occurs in spring and summer. Fungicide applications may be used to control the disease. 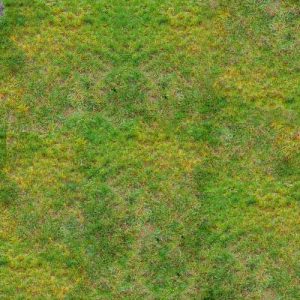 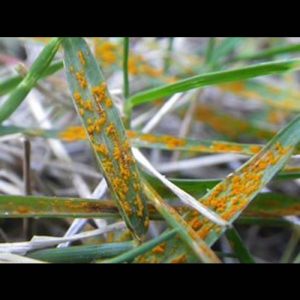 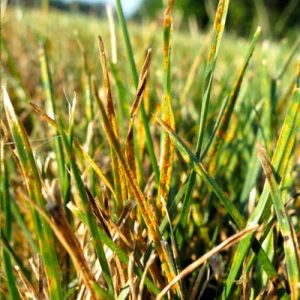 Leaf spot/melting out is caused by the pathogens Curvularia, Drechslera, Helminthosporium, and/or Bipolaris. This lawn disease affects Bermuda, Zoysia and Centipede grass. Leaf spot begins as foliar lesions and may progress to melting out where the entire leaf, sheath, and tiller shrivel. This is seen as significant turf thinning.

The disease is promoted by high levels of moisture and nitrogen. Fungicide applications may be used to control the disease. 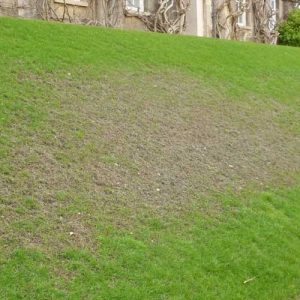 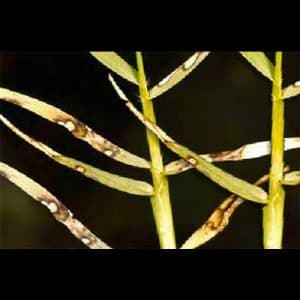 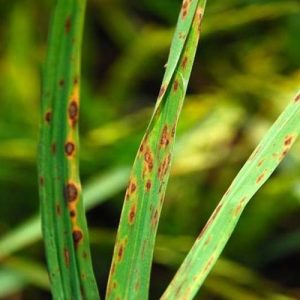 Gray Leaf spot is usually prevalent in hot, humid, wet weather. That sounds like Macon, doesn't it?  Fungicide applications may be used to control the disease. 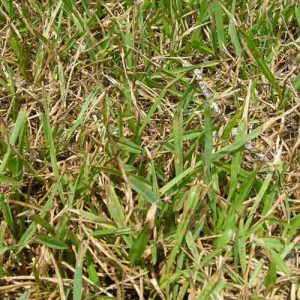 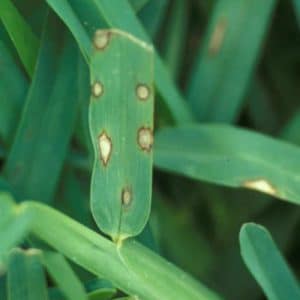 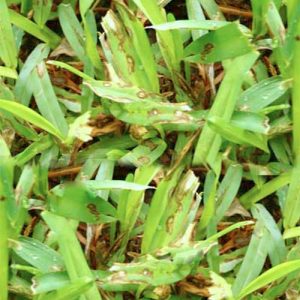 Anthracnose is caused by the pathogen Colletotrichum. It affects all warm-season turfgrasses. The disease is usually active in the hot summer months. It is promoted by high soil moisture, compaction, and low nitrogen levels. Anthracnose causes sheath and crown rot.

Fungicide applications may be used to control the disease. 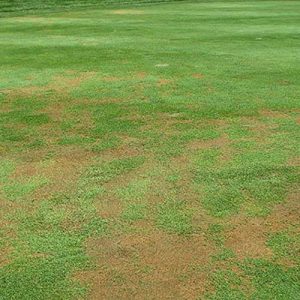 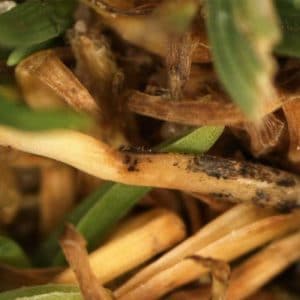 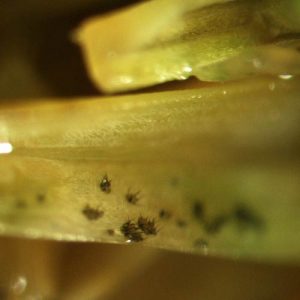 Slime Molds are caused by Physarum and Fuligo. All Warm-season grasses are susceptible to slime molds. Slime molds are not considered pathogenic and however, in extreme cases, the mold may inhibit photosynthesis.

Fungicides are not recommended, and if they must be removed, a garden hose is typically sufficient to knock the mold off of the leaf blade. 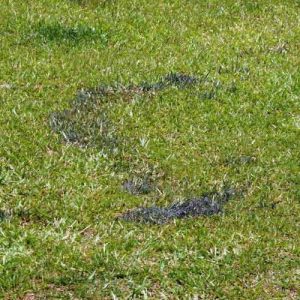 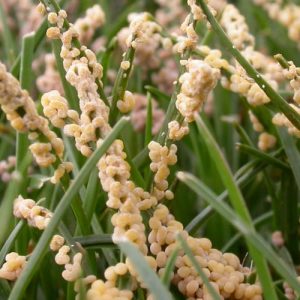 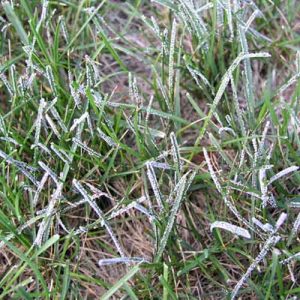 Pythium affects all warm-season grasses. Pythium root rot symptoms appear as areas of wilted patches of turf. The root system of the turf is unable to translocate water.

Fungicides applications may be used to control the disease. 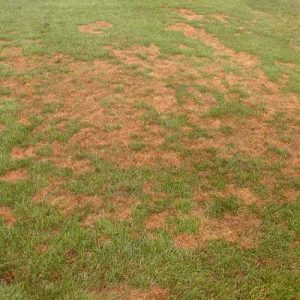 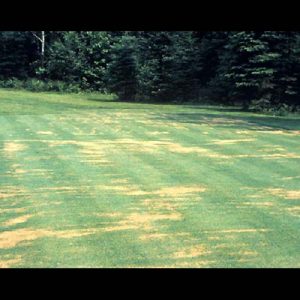 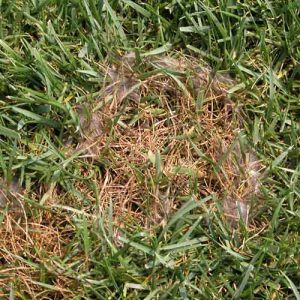